Oddly enough, there are still some Conservatives who are mystified at the claim that a choice to vote for a third party candidate or not to vote at all is, in the end, a vote for Hillary. So here is one last attempt to paint a picture of the problem. 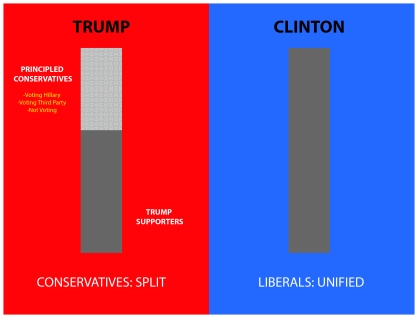 It is simple, really. In order to defeat Hillary Clinton, Conservatives must turn out on election day and they must cast their votes, in unity, for a candidate other than Clinton. Every one who understands the concept of elections and voting understands that whoever gets the most votes will win.

In the last Presidential Election some 126 million votes were cast. Let’s say this happens again and the voters are equally divided between Conservatives and Liberals. If all the Liberals turn out and vote for Clinton and all the Conservatives “turn out” but on principle

It is obvious that Hillary would win because (assuming the number of Conservatives and Liberals are equal) the unified Liberal vote cast all of its votes for Hillary while the split vote of the Conservative voting block decided to divide its support among Trump, no one, Hillary, and third party candidates.

Specifically addressing those who decide not to vote, it should be obvious that a “no” vote in this case (let’s call it a vote cast at home) leaves the Trump ballot box short a ballot while the Hillary box received its Hillary vote. In essence, a “home vote” leaves its corollary Hillary vote unmatched.

For those Conservatives (if they really are that) who have decided to vote for Hillary because they are offended by Trump, they will, on principle, cast there vote in a way that makes them feel more authentically Christian, and yet they will simply be helping put a different offensive candidate into office that will continue the policies of Obama yet adding her own sophisticated brand of Clinton corruption to the mix. Further, she will support abortion, homosexuality, religious intolerance, illegal immigration, etc.

It should be obvious, then, that unless Conservatives remain unified and vote together for Donald Trump, (who at this point is the only candidate with enough support or name recognition to even come close to competing with Hillary),  then Hillary Clinton will be elected. So, those voting for Trump are doing the only viable thing that can be done to avoid another Clinton presidency. Those who, on principle, decide to stay home or vote for a third party candidate are simply helping to put Hillary in office.