I am in no way intending to offer medical or psychological advise. I am not a medical doctor nor am I a licensed counselor. However, if you are struggling with anxiety, depression, panic attacks—or any other kind of mental disorder—I am counseling you talk to a reputable Christian counselor or psychologist, see a good up-to-date doctor, and take your medicine.

I have a whiteboard in my office. I find that it helps to have a place where I can right down an inspirational thought, a concern that I want to keep in the forefront of my mind until I do something about it, a list of things I need to do, etc. So, I write a lot of things down, and, when I feel that a particular scribbling has served its purpose, I erase it in order to make room for the next thought. So, as you can imagine, a lot of writing and erasing goes on on my whiteboard. But four years and one hundred and sixteen days ago I wrote a date in the upper right hand corner of the board: 2/3/14. With all the erasing that goes on, that number stays.

February 3, 2014 was a watershed day for me. It is the day I started taking the antidepressant Zoloft. (It is actually Sertaline, the generic form of Zoloft.) 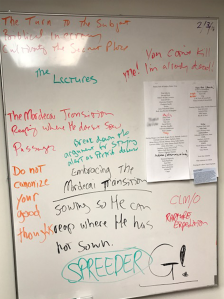 I could have written other dates. Like December 12, 2013: the night my eighty-one year old mother, who had just come to live with us after suffering a stroke, woke up distraught in the middle of the night because she did not know where she was. After helping her calm down, I went back to my room and experienced something I had never experienced before. It was an inescapable sense of despair and unrest. It felt mentally and emotionally electrical. The experience, as it got worse, felt as though some demonic animal had crawled into my brain and would not release me. That horrible experience would come and go for the next three days. I would eventually come to learn that anxiety like this is cyclical.

I could have written down December 15, 2013. That’s the night I missed an event at my church, where I am one of the pastors, because I was completely disabled by anxiety. That afternoon I had to leave our Christmas presentation, after having performed with the Pastor’s Quartet, because I simply could not sit down and focus on what was happening. That afternoon the anxiety—and my alarm—increased exponentially. Before long it felt as if I had become possessed. That night I walked around the perimeter of the church parsonage where we live, through thorns and tree branches—praying and rebuking and declaring and doing all I knew to do as a man of God to break this thing off of me. The anxiety, though still cyclical, was connected to something else that wasn’t so cyclical. It would be a month an a half before I realized that I was entering into a major depressive episode.

I could have written down January 9, 2014, the day I was informed that my mother, who had come to live with us for two weeks before she decided to move back to Texas, had been found dead in her new apartment. It seems she fell and died. That’s the day that my cyclical anxiety turned into a full-blown depression that would not lift, though I still did not realize what was happening.

But I chose February 3, 2014 because that’s the day the most difficult obstacle to my recovery was finally removed, namely, the stigma that gets branded on Christians who take medications for depression and anxiety.

I can’t possibly tell my whole story here. Even now there are some things I experienced and thought that I have rarely if ever spoken about to anyone. It was the worst nightmare I have ever experienced. What I do want to do is offer some advise for those who have the hardest time accepting that they or others are struggling with these kinds of mental issues. I am particularly interested in debunking the myths I am aware of and de-stigmatizing those who are suffering so that they will feel free to own their situation and get the help they need.

One day, in the midst of the worst of it, I was sitting in my office, struggling. I decided to investigate the symptoms of depression. To my surprise I was experiencing almost all of them. The mystery was starting to make more sense. I had already been doing all I could to feel better with exercise and vitamin D, etc. but with little to no help. I called my doctor and asked her if it was possible to beat depression with natural causes and efforts. She said those things work for some people. So then I asked her how I would know when it wasn’t enough and that it was time for medicine. She said when it has disrupted my daily life; when I could no longer function normally. I was there.

Many of you reading this take medicine for allergies, thyroid problems, arthritis, heart issues, you name it. Except for a few extremists, we do not stigmatize people for taking those medicines. If the doctor told you that you needed to begin taking a blood thinner in order to reduce the risk of a heart attack or stroke, you would take it, right? You’d be crazy if you didn’t, and, I might add, a poor steward of your life. But for some reason, especially in the Church, we have often so stigmatized those who struggle with mental health issues that they do not feel safe admitting that they are struggling. Many of the suicides that we hear about on the news have depression and anxiety lurking in the details. I am convinced that this is at least sometimes due to the hesitation some people feel to admit that they are struggling, particularly when it comes to male pastors. (See this article as well, and this one, and this recent story.)

Unless you have experienced clinical anxiety and depression for yourself, or unless you are a trained professional, please don’t give advice or pass judgment

Anxiety disorders are the most common mental illness in the U.S., affecting 40 million adults in the United States age 18 and older, or 18% of the population. (Source: National Institute of Mental Health)  Anxiety disorders are highly treatable, yet only about one-third of those suffering receive treatment. 1

The NIMH estimates that in the United States, 16 million adults had at least one major depressive episode in 2012. That’s 6.9 percent of the population. According to the World Health Organization (WHO), 350 million people worldwide suffer from depression. It is a leading cause of disability.2

A couple of years ago, I heard about a young man in his twenties who had committed suicide. He had been suffering with anxiety and depression but was in a family that would not have been enlightened as to the dynamics I am sharing in this article. How many people have committed suicide or suffered needlessly for years because they were afraid to speak out or get help or because those around them thought that rebuking the devil was all that was needed? 3 The chart below shows that 48% of born-again, evangelical Christians Bible study and prayer alone are all that is needed to overcome serious mental illnesses such as depression, bipolar disorder, and schizophrenia. Don’t get me wrong: Bible study and prayer are powerful and God can absolutely rescue someone from any mental illness. But the same can be said about headaches, gall bladder problems, an hemorrhoids!

Do These Four Things

If you or someone you love is struggling with anxiety and or depression, I strongly suggest the following:

I would never minimize the necessity of trusting in God no matter the struggle, particularly this one. When I went through my struggle I was not able to feel, my perspective was skewed, I struggled to pray, and I suffered major mental battles from the enemy. Satan was not the source of my issue. (OK, technically Satan is the source of everything bad due to the fall, but it was not a direct invasion of Satanic forces which took me from normal to mental struggle). However, he did act as a terrorist, capitalizing on my ignorance and taking credit for my struggles in order to increase fear. He tried to convince me that somehow I had fallen into his control. I was well able to hear his lies. But Jesus was there and He did miracles for me, one in particular, that I will write about on another occasion.

2. Go to a trustworthy, well-informed doctor

Here are some tips about which doctor not to choose:

I had the wrong doctor at first but then found one who disarmed my concerns, demonstrated a knowledge of appropriate treatments,  and became a real blessing to me. That said, goto the doctor!

3. Go to a good Christian counselor

It is important to realize that medicine is not necessarily the first step in the road to recovery. A lot can be done through the right foods and vitamins, and through exercise. A good counselor will know that. He or she should be able to help you make that decision.

Also, it is important to understand that, along with the possible (I would say probable) issue of a chemical imbalance, life issues can certainly be a part of what brought about the imbalance to begin with. In this case it is not enough to go to your pastor (who may or may not be free of stigmatizing tendencies). You need someone who is a genuine Christian, has had solid education and training in dealing with mental health issues, and can marry spiritual principles with the principles of good mental health.

Your counselor may even want to send you to a psychiatrist. Don’t be afraid of that. As I understand it, a psychiatrist is the one who will be able to give expert advise on medication. But this is all the more reason to begin with a Christian counselor who then can recommend a good Christian (or at least an understanding) psychiatrist.

Please understand: I am not pushing you toward medicine nor am I suggesting that medicine is always the answer! But, if after prayer, consultation with a good doctor, and time with a good Christian counselor, the general consensus is that medicine will help you, DO IT!

There are certain times in your life when your struggles, even your failures, may reveal which of your relationships are genuine and which ones are not. So be it. At milestones such as these you have to move forward with those who are willing to walk with you through your struggles, imperfections, even failures. Put another way, you have to be prepared to say, “If you can’t walk with me through these kinds of struggles, then you can’t walk with me.” No worries. Jesus can and will.

I wrote this article a couple of years ago. I sat on it, re-visited it, updated it, and now updated it again and finally posted it. I had hoped I would eventually come of my medicines. Instead I have had to increase them. Here is a little on that.

3 thoughts on “Yes, Virginia, Christians and Even Pastors Can Suffer with Depression and Anxiety”